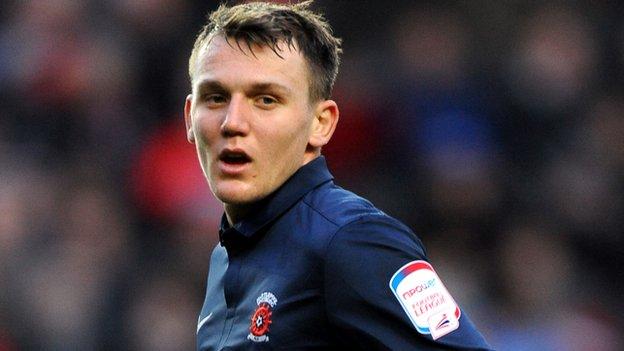 Shrewsbury Town's unbeaten start to the League Two season was brought to an end by Hartlepool, who scored a goal in either half at Victoria Park.

Loan striker Charlie Wyke put the home side ahead in the fifth minute with a left-foot shot from inside the box - his second goal in three games.

Brad Walker then wrapped up victory 11 minutes from time from close range.

It means a second straight defeat for Town, who exited the Johnstone's Paint Trophy at Preston in midweek.

And the injury-hit visitors, who were already without midfielders Dave McAllister and Aaron Wildig, also lost defender Cameron Gayle to injury on 17 minutes.

Pools spurned an early chance when Wyke shot narrowly wide with the goal gaping, but the 21-year-old Middlesbrough loan signing soon made amends, sliding home after being picked out by a Jack Compton pull-back.

But Pools were the better side, sealing the points when a superb counter-attack ended with Walker sliding home Compton's pin-point cross.

"We just didn't recover from losing an early goal. We needed to move quicker and be a bit sharper - and we didn't do that so I'm very disappointed.

"When we got people into good areas we didn't look dangerous going forward. We have to do the basics right to have a chance.

"I never thought we were completely out of it, but we needed someone to come on and produce the moment that was needed and we were at sixes and sevens to concede the second goal. We got caught."