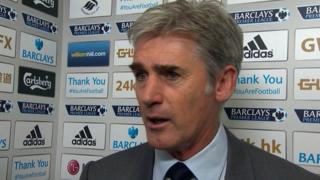 West Bromwich Albion head coach Alan Irvine admits Nathan Dyer's second-minute goal had a "big impact" on the match as his side lost 3-0 at Swansea City.

Dyer opened the scoring early on after some intricate link up play with Gylfi Sigurdsson, Wayne Routledge double the home side's lead with a stunning volley before Dyer again combined with Sigurdsson to make it 3-0 and wrap up the points.

West Brom have now failed to score in their last four Premier League away games.