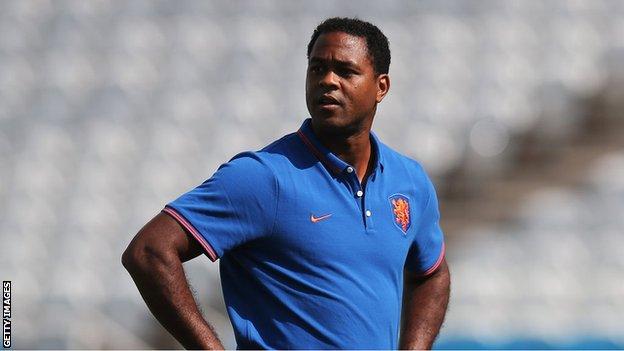 Kluivert, 38, was assistant to Louis van Gaal at the 2014 World Cup as the Netherlands finished third in Brazil.

He has yet to manage a club in his own right but did spend a year with FC Twente's reserves and had spells at AZ Alkmaar and as NEC Nijmegen assistant.

Lobera was most recently in charge of Spanish second-tier club Las Palmas.

The 37-year-old helped bring through European and former world champions Pedro and Sergio Busquets while at the Nou Camp. He also spent a short time as assistant manager to the late Tito Vilanova two years ago.

Kluivert helped Ajax to their famous 1995 Champions League triumph, scoring the winning goal against AC Milan in Vienna, and had a lengthy spell at Barca after a year at Milan.

He earned 79 caps for the Netherlands national team over a decade.

The Ross County board will begin considering candidates for Derek Adams's replacement next week.

after a largely successful seven years in charge over two spells, with the club languishing at the bottom of the league with four straight opening defeats. His father George, who was director of football, also left the club.

I think an affiliation with the Highlands is really important

Chairman Roy MacGregor confirmed Kluivert had applied for the job.

"The credit for putting Ross County on the map is back to George and Derek and I'd like to thank them for that.

"The calibre of applicant has been really good."

Inverness Caledonian Thistle and Hibernian boss Terry Butcher has also been mentioned in connection with the job.

"I believe Terry [Butcher] is under garden leave with Hibs," explained MacGregor.

"He certainly was a motivator [at Inverness], he did a wonderful job there. He has an affiliation with the Highlands.

"I think an affiliation with the Highlands is really important and that they understand what our area is about."