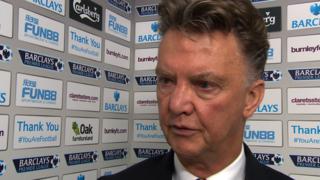 Man Utd did not do enough - Van Gaal

Manchester United boss Louis van Gaal says although his side's performance improved in the second half of their 0-0 draw at Burnley, it was "not enough" to win the match.

David Jones hit the bar with an early free-kick for Burnley, and £59.7m British record buy Angel Di Maria made his United debut, but went off 20 minutes from time with cramp.

After taking two points from three games, Manchester United have made their worst start to a Premier League season since 2007-08.