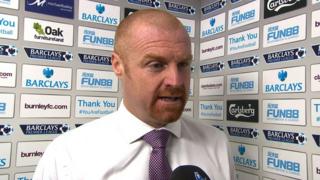 Burnley manager Sean Dyche says he has seen "good signs" in his team's play in their past two matches after they managed a goalless draw against Manchester United.

The result at Turf Moor gave Burnley their first point since returning to the Premier League, and the Clarets had the best chance of the game when David Jones hit the bar with an early free kick.

The clean sheet is Burnley's first in 30 Premier League matches.