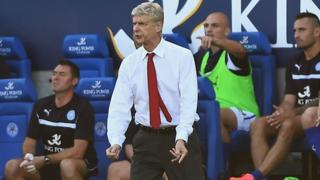 Arsene Wenger says there was "something missing" for Arsenal after they drew 1-1 with Leicester City.

The Arsenal boss points to their Champions League exertions in midweek as to why his side were lacking in "sharpness and creativity".

Alexis Sanchez had turned in his first Arsenal league goal from close range before Leicester equalised, becoming the 100th player to score for Arsenal in the Premier League.