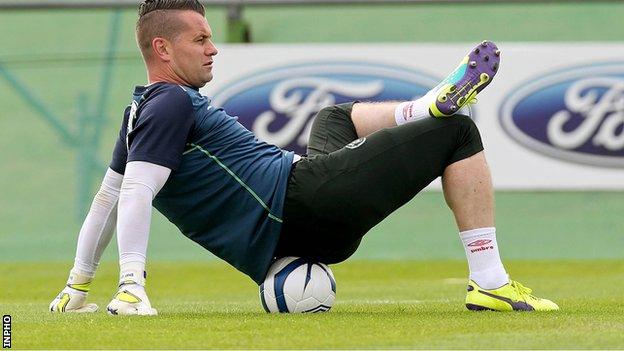 Martin O'Neill has opted for the 'better late than never' policy with his surprise decision to recall veteran goalkeeper Shay Given on the eve of the Euro 2016 qualifying campaign.

Having ignored the Donegal man throughout the first 10 months of his tenure, O'Neill has suddenly put his faith in the Aston Villa stopper.

The 38-year old has not played for his country since a disappointing Euro 2012 in Poland, when he conceded nine goals and with his fitness a problem throughout the tournament.

Given subsequently retired from international football but had a re-think after an absence of club football, only to be rebuffed by then manager Giovanni Trapattoni, who had decided to move on without him.

So too, apparently, had O'Neill who initially overlooked Given when he was playing superbly at Middlesbrough on loan last season.

The Derry man went with David Forde, Kieran Westwood, and Rob Elliot for his first nine matches in charge.

However, the seeds of doubt have evidently grown in O'Neill's mind regarding his goalkeeping options and after watching Given in action during Villa's recent League Cup defeat to Leyton Orient, he took the decision to bring him back into the fold.

Undoubtedly, the influence of Roy Keane - who serves as assistant to both the Republic boss and Paul Lambert at Villa - has been a key factor in the decision making process.

Given is now in line to add to his 125 caps in what would be a remarkable turnaround in his career.

The Republic face a daunting trip to Georgia this Sunday to kick off their qualifying campaign.

"It's a surprise, but I'm delighted at the same time", admitted John O'Shea, who says in the wake of Richard Dunne's retirement from the Ireland set-up, the return of the experienced net-minder would be crucial.

"To have someone like Shay coming in obviously helps the group. We're going to a tough destination and Shay will be important for that situation."

It remains to be seen if Given will go straight in as the number one goalkeeper for O'Neill's first competitive fixture, leapfrogging the incumbent David Forde and Kieran Westwood.

Both Given and O'Neill have already stated that the recall is not based on any guarantee of a starting place.

O'Neill says he will only decide on his line-up for Tbilisi "a couple of hours before the game".

Former Derry City keeper Forde has been playing regularly with Millwall while Westwood made the summer switch from Sunderland to Sheffield Wednesday to boost his international prospects.

Should O'Neill go for Given, who has seen so little competitive action at Aston Villa and finds himself sitting on the bench every week, it will represent O'Neill's biggest gamble in the job yet.

It will, undoubtedly, upset the other goalkeepers in the squad.

However, O'Neill knows he needs to hit the ground running. So far, his reign has been pretty uninspiring but the serious business is about to begin.

"Qualification is what we will be judged on", said O'Neill when he took the Ireland job nearly a year ago.

Three out of Ireland's first four group games are away and with newly crowned World Cup champions Germany the front-runners, O'Neill faces a battle with Poland and Scotland for the other automatic play-off positions.

Despite an extensive search for new talent, O'Neill has found fresh faces hard to find.

That may explain the return of Given in convincing O'Neill he is still the Republic's best option in goal, while West Ham midfielder Mark Noble could be available for next month's double header against Gibraltar and Germany after he expressed his disappointment at not earning an England call-up.

This will be Given's ninth qualifying campaign with Ireland and he will arguably be remembered as the country's greatest ever goalkeeper.

His return does represent a high risk strategy for both himself and his manager, but if the duo can help lead Ireland to France 2016 it will go down as a masterstroke.