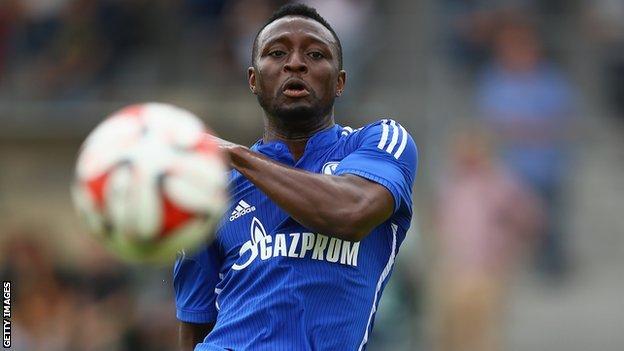 Nigeria will report Schalke to Fifa after the Germans refused to release striker Chinedu Obasi for this month's 2015 African Cup of Nations qualifiers.

Schalke blamed the issue on Obasi's passport being held at an embassy while a visa application is processed ahead of their Champions League matches.

"The country has the right to our player Chinedu Obasi for the games."

African champions Nigeria take on Congo on 6 September and South Africa four days later and Super Eagles officials have been angered by Schalke's attitude over Obasi.

The Bundesliga club are keen for Obasi to play in their matches against Borussia Monchengladbach in the league and Chelsea in the Champions League on 13 and 17 September respectively.

Alaiya added: "Fifa regulations say that a player must report to his national team once international call-up rules are duly respected.

"The team secretary has done the needful [by sending out the invite three weeks earlier] and we will report Schalke to Fifa for appropriate sanctions."

Super Eagles temporary coach Stephen Keshi told BBC Sport that Enyeama has asked to be excused "so he can attend to urgent family commitments".

"He's a big player for us but when someone is dealing with a family issue, it's very sensitive consequently he will be unavailable for these games", Keshi said.

The defending champions will also face Sudan in Group A with the top two advancing to January's finals in Morocco.