With £150m of attacking talent already at his disposal, few expected Manchester United manager Louis van Gaal to dip back into the transfer market for another forward.

But the Dutchman did exactly that on transfer deadline day - snapping up Monaco striker Radamel Falcao on a season-long loan deal.

The Colombian, 28, is generally considered as one of the world's most lethal attackers, having scored 104 goals in 139 league games for Porto, Atletico Madrid and Monaco since moving to Europe in 2009.

"Falcao totally came out of the blue. I don't think anyone woke up on Monday and thought he was going to Manchester United," says former Red Devils defender Phil Neville, who also served as a coach under David Moyes last season.

But where will he fit into Van Gaal's plans? That is one of the many questions surrounding Falcao's arrival, and United's near-£150m summer spending spree, tackled here by ex-England international Neville.

Should Van Gaal have prioritised other areas?

"Who are the centre-backs out there that United could buy today? There are not many.

"I don't think the quality is out there - we have seen that by some of the defending throughout European football. I was out every week last season scouting - we looked at Eliaquim Mangala, Thomas Vermaelen and Mats Hummels.

"Mangala - who ended up joining Manchester City for £32m - is young, raw, quick, but is the fourth choice centre-back for France. He has the attributes to go higher but for that money I thought he wasn't up it.

"Hummels is captain of Borussia Dortmund and they said he wasn't leaving. United tried for Vermaelen, who went to Barcelona, and ended up with Marcos Rojo who was probably second choice."

Is Falcao a statement of intent or a panic buy?

"United did not need run of the mill signings. They needed world class signings and Falcao is world class. When that news came through every Manchester United fan would have been cheering.

"And the knock-on effect has been incredible, with Javier Hernandez going to Real Madrid and Danny Welbeck going to Arsenal.

"It's great that world class players like Falcao are coming to the Premier League. We lost Luis Suarez, we lost Gareth Bale and you just thought that maybe the pull of La Liga or the Bundesliga was greater than the Premier League.

"But I think we've proven now that this probably still is the greatest league in the world and it's great that the best players are coming to England."

Where will he fit into Van Gaal's starting XI?

Phil Neville: "It's going to be so exciting now for Man United fans to see how they are going to fit all these Galacticos into the same team.

"Because there's been a big turnaround of players and the nucleus of a new team being built I think it's going to take time. Louis van Gaal has said that.

"He needs time to integrate these new players into his team, into the club, but more importantly into the system that he's playing.

"People are saying 'where is Falcao going to fit in?' Well, who cares, just fit him in and let him score goals."

Will Van Gaal stick with three at the back?

Phil Neville: "I think he will persevere with the three at the back system. He seems like someone who wants to teach his players his system and also show that he can win the Premier League playing three at the back.

"Daley Blind is a good signing because he can play in a number of positions and he was Van Gaal's trusted man for the Dutch in the World Cup.

"He can play left wing-back, left centre-back and in midfield, and is someone who Van Gaal will trust to imprint his philosophy on the other players in the side.

"Three at the back is a system I need convincing on. The history of the club is four at the back but he wants to do it his own way and the players he is bringing in suggests he will stick with three at the back."

Should Mata be fearing for his future?

Phil Neville does not think so. But, as you can see by his predicted starting XI, he believes that the Spain attacking midfielder will have to get used to the bench after the arrivals of Angel Di Maria and Radamel Falcao.

"I don't think Mata will have worries about his future at Old Trafford. But, because United are not involved in the Champions League or League Cup, he will struggle for game time.

"There is competition for places and without being in Europe there could be problems further down the line for Van Gaal."

What qualities will Falcao bring to the team? 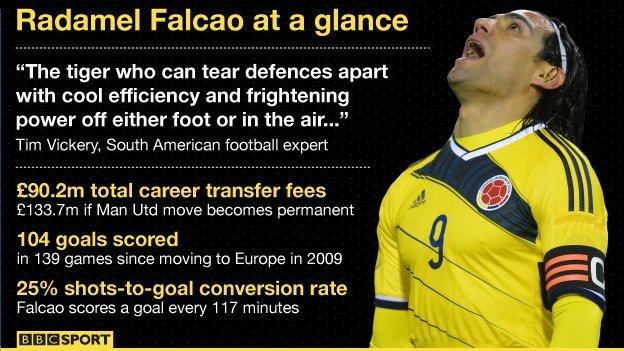 Phil Neville: "People say Falcao is not needed but the philosophy of Manchester United is to attack and score goals. Now they won't be short of goals."

Phil Neville: "There is a recruitment process in place. United made a couple of signings that if David Moyes was still in charge then he would have made them. There are other signings which weren't on our radar, who we didn't explore or fancy. Louis van Gaal is picking players to fit his system and philosophy.

"Rojo is one and Blind is another who could be utilised in midfield or on the left hand side. Di Maria has been bought for a certain job and time will tell where Falcao fits in.

"The other signings, I think, were already on their radar before Van Gaal came in. Luke Shaw was a given - he will probably be the best left-back in England if not Europe. Ander Herrera was watched 20 or 30 times last year and we were told he would be next main Spanish midfielder. They are young signings and fit into the philosophy of the club so I don't think that would have changed."

Phil Neville: "At the start of the summer United vice-chairman Ed Woodward said Manchester United could still attract the world's best players - and they have done that.

"Sometimes you have got to forget the price tags. There was money there to spend and when a club like Manchester United goes in for a player they have to pay big money. It's a given.

"But it is not a gamble signing Angel Di Maria or Falcao."