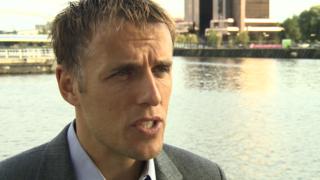 United have agreed to sign Colombia striker Radamel Falcao in a £6m season-long loan deal from Monaco, having already broken the British transfer record this summer with the £59.7m capture of Angel Di Maria from Real Madrid.

Neville predicts some exciting times for Manchester United fans, but believes their will be "ups and downs throughout the season".