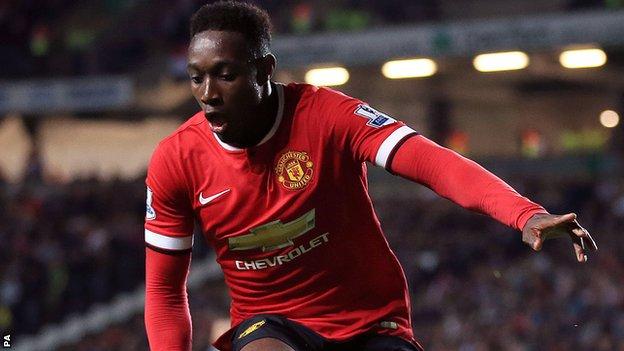 The 23-year-old, capped 26 times by England, has signed a "long-term deal" at the Emirates Stadium.

"Everyone at Arsenal welcomes Danny to the club and looks forward to his contribution in an Arsenal shirt this season," a club statement read.

Welbeck, who scored 29 goals in 142 United appearances, was told he could leave given the impending arrival of Radamel Falcao on loan from Monaco.

Arsenal say the Welbeck deal is subject "to the completion of regulatory formalities".

The Manchester-born forward, who joined United's academy aged eight, also played 28 times during a loan spell with Sunderland, and made a further eight appearances for Preston.

The Black Cats were keen to re-sign Welbeck, a Premier League winner in 2013, while Tottenham were also interested.

But he has joined Arsenal, who are without striker Olivier Giroud for up to four months after he broke a leg.

The Gunners were not expected to sign a replacement for the Frenchman, but manager Arsene Wenger said on the eve of deadline day the club remained "very active" in the transfer market.

Welbeck made his England debut against Ghana in March 2011 and has scored eight times for his country.

He is part of Roy Hodgson's squad for Wednesday's friendly against Norway at Wembley.

He becomes the second forward to leave Old Trafford on deadline day after Javier Hernandez joined Real Madrid on loan.

Meanwhile, Arsenal's Japanese midfielder Ryo Miyaichi, 21, has joined Dutch side FC Twente on loan for the remainder of the season.