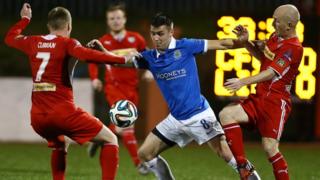 Linfield hold champions Cliftonville to a goal-less draw in an entertaining Irish Premiership game at Solitude.

The Reds had the better of the first half, with David McDaid and Chris Curran going close for Tommy Breslin's side.

Linfield came into the game more after the break, with both sides having opportunities to win the game.

Breslin and Linfield counterpart Warren Feeney offer their thoughts after the match.