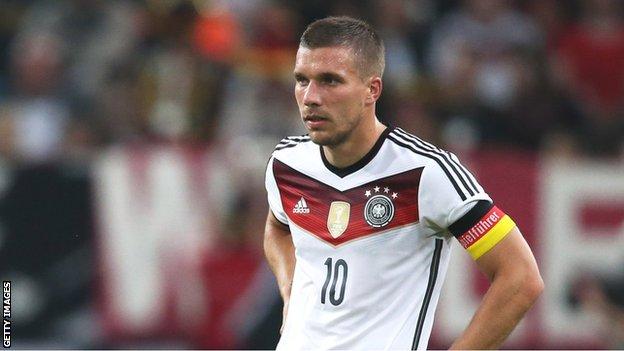 Podolski, 29, came on as a first-half substitute in the in Dusseldorf on Wednesday.

"I think they will play a dirty game," said the World Cup winner.

"Teams like Scotland or Ireland, especially at home they are strong, but our focus is on winning the game on Sunday and this is important for us."

Podolski, who is hoping to reach his fourth European Championship finals, felt Germany played well, despite the defeat by their World Cup final opponents.

"I think it was a good performance from us," he told BBC Scotland.

"Argentina is not a bad team. They had five shots on target and scored four goals, we had 15 and scored two. We didn't have a bad game, we just didn't score.

"In the end it was 4-2 and we must focus on the next game. It's important for us because it is a qualification game for the European Championship.

"It was important for me to play 60 minutes. I feel better now and I hope to play on Sunday again."

Julian Draxler has been ruled out of the game against Gordon Strachan's side with a thigh injury, while Jerome Boateng, Mezut Ozil and Mats Hummels are all doubtful.

Coach Joachim Low is planning to call up other players on Thursday.