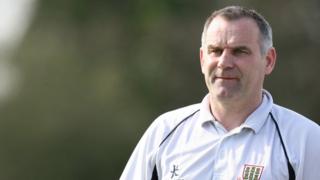 Ballymena United Glenn Ferguson praises his players for the club's run to the top of the Irish Premiership table.

Ferguson has been named as the Northern Ireland Football Writers' Manager of the Month for August after leading the Sky Blues to three wins and one draw in their five games during the month.

He said that without the players carrying out his instructions, the team would not pick up points, and he hopes they can continue their good form in September.