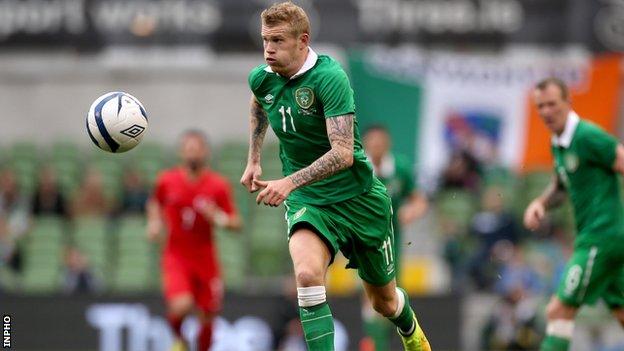 James McClean is out of the Republic of Ireland's opening Euro 2016 qualifier in Georgia on Sunday amidst concerns about his match fitness.

The Wigan midfielder has not regained full fitness after an ankle injury.

Republic manager Martin O'Neill has reluctantly ruled him out of the game.

"James is disappointed in a sense, he thinks he is further on," said O'Neill, "[but] my concern really is while the injury has healed up, he hasn't played that much contact football".

O'Neill had hoped to play the Derry man in Wednesday night's 2-0 friendly victory over Oman at the Aviva Stadium, but he did not even make the bench and was subsequently withdrawn.

His absence is a blow to the manager, who used the winger extensively in his previous games in charge.

"It's not that he has picked up any fresh injury or anything like that," O'Neill said.

"We put him in yesterday {Tuesday], he didn't do too badly at all, but I thought everything was just maybe too much for him.

"Wigan weren't really that keen about him playing either, and I understand that from a club viewpoint.

"If he did maybe pull a hamstring or a calf muscle in an attempt to strive for full fitness, then he might miss the games next month.

"At least now he has got that chance to get ready."