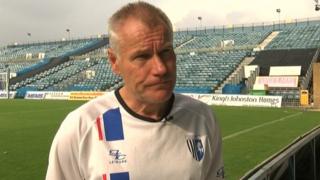 Gillingham manager Peter Taylor tells BBC South East Today that his players will relish playing in front of a large crowd at the Ricoh Arena.

Friday's opponents Coventry City, who have been playing in Northampton since the start of last season, are staging their first home match at the venue since April 2013 after settling a long-running rent row.