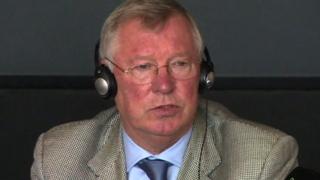 Speaking at a Uefa conference in Switzerland, Ferguson said it could be used to eradicate simulation, something he views as a "disease in the game".

The 72-year-old, who took up a position as a Uefa coaching ambassador following his retirement in 2013, also talks about who he thinks may win this season's Champions League.