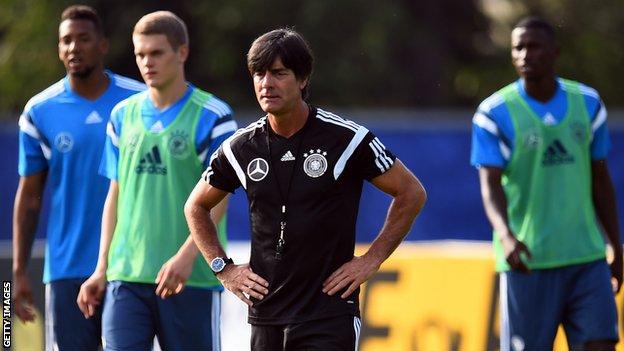 World Cup-winning Germany coach Joachim Low says his desire for success is as great as ever as his side begin their quest for further silverware.

Low is aiming to guide his team to Euro 2016 glory, starting with victory over qualifying opponents Scotland on Sunday evening.

"My motivation is there completely," said the 54-year-old.

"The motivation from me is from the inside and if I thought I wouldn't have the motivation I would quit this job."

The German coach has decisions to make over team selection with full-back and striker the areas of particular concern.

And he urged his players to improve their concentration following Wednesday's 4-2 friendly defeat by Argentina in Dusseldorf.

"At this level if you make mistakes you will be punished," said Low.

"Yes, there were a few mistakes in defence in the Argentina game but we weren't really that bad.

"We have to close the space and concentrate over 90 minutes. Scotland have had no problems in their preparations.

"They have a British mentality but they don't play with a British style these days. They try to play good football but are still very well organised.

"They have quality players and have nothing to lose in this match so will play with no fear. We know all about their team and their biggest strength is that they are a team.

"They will be motivated, physical and they will run a lot and they are also very good in one-on-one. It will be a difficult match for us."

Low described the visiting Scots fans as among the best in the world as he looked forward to a terrific atmosphere at the Signal Iduna Park in Dortmund.

Both the coach and Chelsea's Andre Schurrle praised players like Steven Naismith and Darren Fletcher, adding that Scotland's two wins over Croatia over the last 18 months provide evidence of the threat Scotland could pose.

"Steven Naismith is a very good player, he's very quick and he scored a lot of goals," said 23-year-old Schurrle.

"He played well against us for Everton so he's dangerous and someone we'll have to watch.

"Darren Fletcher also has a lot of quality and experience from his time in England (with Manchester United).

"But Scotland have other players who play in England as well so they have a quality squad.

"What we will have to do is make sure our players play well on the night and do enough to get a victory."