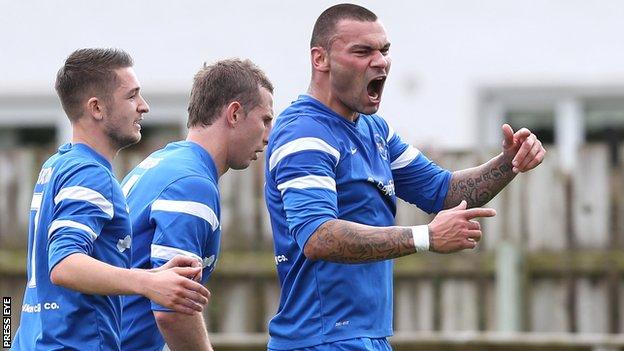 Ballinamallard stormed to their first league win of the season with a 3-0 victory at Ferney Park which knocked Ballymena off the top of the table.

The Mallards created the better first-half chances and took a deserved lead just before the break when Anthony Elding bundled home from close range.

Ballymena failed to threaten in the second half and Liam Martin's superb strike into the top corner made it 2-0.

Martin rounded keeper Dwayne Nelson before slotting in the third.

The Co Fermanagh hosts made a bright start with Martin hitting the side-netting while Lafferty fired over and Liam Carters saw his looping header go just over.

Nelson denied the impressive Lafferty before Ballymena almost snatched the lead when Matthew Tipton's shot was blocked on the line by Mark Stafford.

The opener came two minutes from the break with Elding getting the final touch after Stafford flicked on from Cathal Beacom's cross.

Ballymena enjoyed plenty of possession on the restart but they lacked potency and Martin sealed three precious points for the Mallards with two goals in three minutes.

His first on 79 minutes was a fine finish, his shot from 18 yards curling beyond Nelson and into the Sky Blues net.

Elding's flick-on sent Martin clear and he rounded Nelson and finished at the second attempt to complete his double.

Ballinamallard move up two places to ninth while Ballymena slip to third and a point behind new pacesetters Glenavon.

"It's just great to get the win especially after last weekend's 4-0 defeat by Cliftonville," said Mallards forward Johnny Lafferty.

"We're played well in patches this season but we were able to put it together for the full 90 minutes against Ballymena."