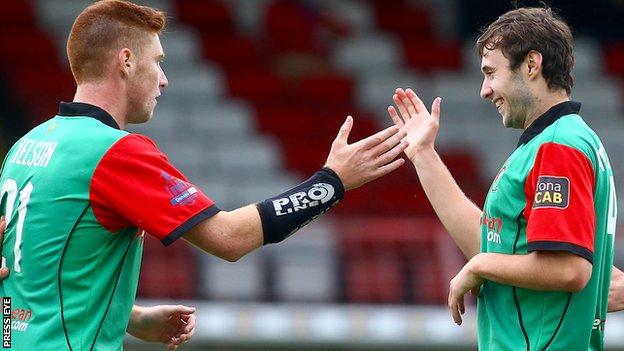 Howard Beverland's own goal and a David Scullion strike gave Glentoran a 2-0 win over struggling Coleraine.

Fra McCaffrey's shot was turned into his own net by Beverland before Darren McCauley and Michael Hegarty went close for Coleraine at the Oval.

McCauley chipped wide after the break and Glens striker Curtis Allen hit the woodwork before Scullion made it 2-0.

Keeper Michael Doherty was stranded as Scullion volleyed into an empty net from 25 yards five minutes from time.

It was a unfortunate start for the Bannsiders, who were aiming to bounce back from Tuesday's 6-2 hammering by Crusaders.

McCaffrey's speculative strike found the foot of Beverland and Doherty had no chance as the ball flew into the bottom corner.

Hogg palmed over an angled strike from McCauley while Hegarty blazed over when well placed.

Doherty kept out Howard Beverland's header and Allen efforts either side of the break.

Glentoran created the better second-half chances and Allen volleyed against the bar four minutes before Scullion sealed the points.

Doherty rushed out to make a clearance but the ball broke to Scullion and he supplied a composed finish to condemn his former club to a fourth league defeat.

"It's a disappointing result but I wanted a response after Tuesday's defeat and I got that," said Coleraine boss Oran Kearney.

"It was an unlucky first goal to give away and in the second half we were unfortunate not to get something out of the game.

"If we show the application that we did in this match then we will win more than we lose."