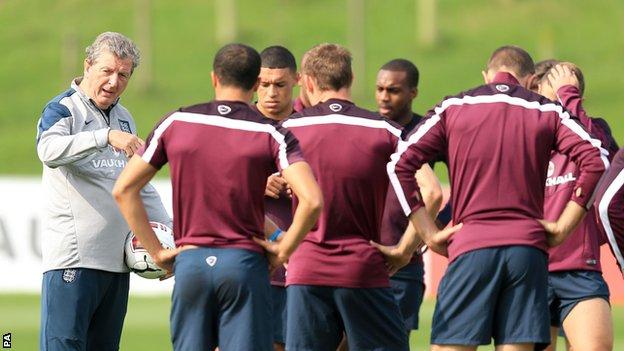 England boss Roy Hodgson says it will take a long time for him and his team to get over a dismal 2014 World Cup.

Hodgson's side were knocked out at the group stage in Brazil this summer after defeats by Italy and Uruguay and a draw with Costa Rica.

"You don't get over that kind of disappointment and shock in a summer," he told BBC Radio 5 live's Sportsweek.

"It's going to take a lot of time before we can even put that into some kind of perspective."

England begin their Euro 2016 qualifying campaign against Switzerland in Basel on Monday.

Just 40,181 fans watched Wednesday's 1-0 friendly win over Norway, England's lowest crowd since Wembley reopened in 2007, with Hodgson aware his side have work to do to convince their supporters.

"For me, the future does look bright but we are going to have to go through a further period of pain, I fear, because we are not going to turn everyone's perception around within a game or two," he said.

"But I am 100% certain that the quality of these players and the football that they play will ensure that our fans not only stay with us, but will be very happy with what they see."

Hodgson acknowledged the World Cup had "hardened" him and his players.

"Two years along the road we will be much stronger, much better and more experienced, but with the enormous talent and potential that I see in the players."

Hodgson again defended his use of two expletives when dismissing a statistic that England only had two shots on target against Norway.

"My robust defence could have been translated as being angry but no, I'm anything but angry," he said.

"I'm certainly not angry with the players and what they are trying to do. They are working very hard and taking their responsibility very seriously."

Hodgson also believes the Football Association would welcome the chance to give David Beckham a role within the organisation.

Former national captain Beckham, 39, told the Daily Telegraph he would be "proud" to help England "in any way".

Hodgson said: "I'm 100% certain they will be happy to find a role for him.

"If he could make himself available for England in some way or another, I've got no doubt that FA chairman Greg Dyke and general secretary Alex Horne would welcome his presence."