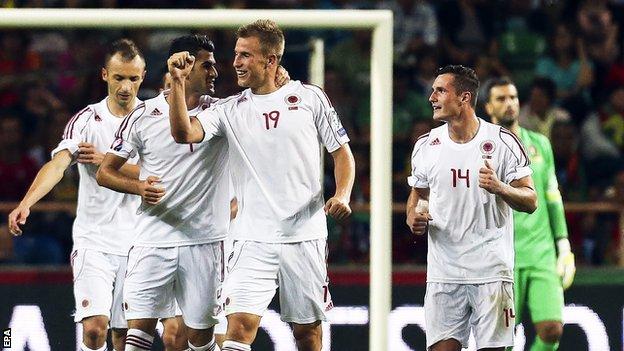 Albania - ranked 70th in the world - produced a major surprise as Portugal's Euro 2016 Group I qualifying campaign got off to a terrible start in Aveiro.

A volley from Bekim Balaj proved enough to sink the 2012 semi-finalists.

Portugal were without Cristiano Ronaldo but still fielded a strong side that included Manchester United's on-loan Sporting Lisbon winger Nani.

There was to be no fairytale for the minnows in a tough group which also includes world champions Germany, the Republic of Ireland, Scotland and Georgia.

Kamil Grosicki also scored two for the Poles, while Lukasz Szukala joined them in finding the net.

Denmark had to come from behind to beat Armenia, Thomas Kahlenberg settling the Group I encounter in Copenhagen.

The Faroe Islands, ranked 183 in the world, took the lead against Finland before losing 3-1 in Group F, while Romania won 1-0 away to Greece in the same group.