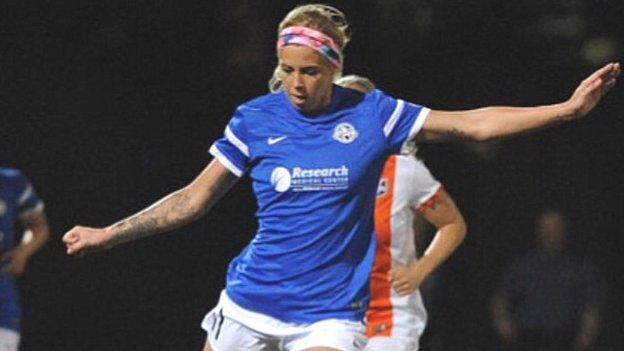 The 23-year-old has been with the US professional League Champions since last season and has featured for the USA Under-23 side.

Born in Kansas, she began her college career at Nebraska University and later played for Santa Clara University.

"I am excited to experience soccer in Scotland and compete in Champions League," said Marlborough.

Marlborough's first opportunity for competitive action will be in the SWPL against Spartans on Sunday 21 September.

"This is the second year in a row we have brought a player in on loan from the professional League in the States," said Montgomery.

"Our loan of Jess Fishlock last year was good for us and she had a great impact on the team and indeed the fans.

"As everyone knows, this is our most crucial and challenging time of the season as we look to do our best in the knock out rounds of the Champions League as well as pushing on to try and retain our domestic treble.

"It takes a lot of hard work, a great and talented squad to compete on all fronts as the big games come thick and fast, and we believe the addition of Morgan will help us try to achieve our ambitions this season."