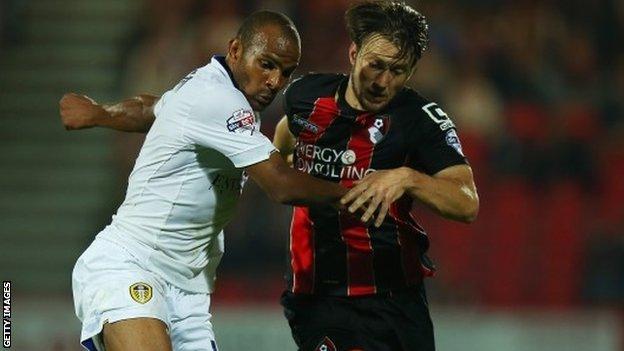 Guiseppe Bellusci and Mirco Antenucci inspired Leeds to a second-half fightback as they moved above Bournemouth in the table.

Andrew Surman curled the home side ahead but despite a host of chances they could not increase their lead.

Antenucci wrapped it up with a calm finish as caretaker boss Neil Redfearn remained unbeaten.

Leeds goalkeeper Marco Silvestri had already made a fine save to deny Ryan Fraser when Surman hammered home his first goal since re-signing on transfer deadline day.

Matt Ritchie then had two efforts saved before Callum Wilson was also denied.

Leeds were far better after the break and got a deserved equaliser when Doukara finished from Tommaso Bianchi's pass.

Bellusci then drilled a 30-yard free-kick into the top corner which left Lee Camp helpless.

And after the wonder-strike, the stage was set for Antenucci to pick up on a Doukara through ball and round off victory.

"Bournemouth showed for 30 minutes they are the best footballing team in the league, they murdered us in that period but we took confidence from only going in 1-0 down.

"It was an outstanding goal from Giuseppe. I didn't see that coming, when he was lining up I thought it has got to go in or hit row Z otherwise they will break away. It was outstanding.

"I am enjoying being in charge and the club is in a far better position than when I took over. The lads are playing with confidence.

"I know Massimo Cellino has got a coach in mind and if he wants me to work with the new guy then great. This might be the start of something if we keep building the momentum."

"We need to be more clinical but what I will say, which is unlike me, the referee was really poor for us.

"We will not change our principles. For me this is the best way to play football and to get consistent results and to move the club forward.

"We will not revert to long ball football and the principles will always remain while I am in charge."