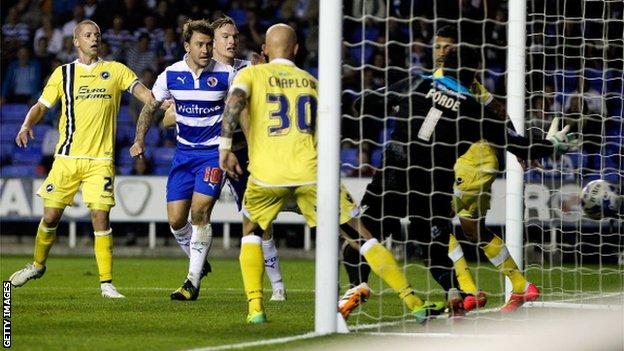 Cox had earlier put the Royals ahead with a long-range effort and Nick Blackman doubled their lead from the penalty spot.

But Millwall fought back to level through goals from Ricardo Fuller and Mark Beevers either side of the break.

They looked set to earn a point but with six minutes left Cox stooped to nod home a Jordan Obita corner.

Despite a run of just one win in their previous five games, Millwall started brightly with Fuller testing goalkeeper Adam Federici with a firm header.

But Reading quickly took control and went ahead in the sixth minute when Cox latched onto a huge clearance from Federici to fire past Millwall goalkeeper David Forde from 20 yards.

Glenn Murray then headed over from an inviting Obita cross and with 15 minutes gone the home side went further ahead.

Blackman drove in from the left flank and after being brought down by Byron Webster in the penalty area took the spot-kick himself to make it 2-0.

Millwall looked up against it but hit back with Federici making a fine double save to deny Scott Malone and Scott McDonald.

But the Australian was beaten for the first time in four games when the dangerous Fuller made space to steer home a low shot.

Millwall then levelled nine minutes into the second half when Beevers headed home a corner from substitute Martyn Woolford at the far post.

There was then little to separate the two sides but with time running out Cox pounced to claim his fourth goal of the season and take Reading into the top six.

"We've got players who just want to score goals. You can see that everywhere.

"We've got a huge attacking threat at this football club and not just in one area, which is really pleasing.

"That's four wins on the spin now in league and cup. The spirit is great and we've got a really good attacking prowess about us at the moment."

"My wife summed it up the other day when we were playing golf. She said very simply 'golf can be a cruel, cruel game'.

"Football is as well. If we deserved to lose that game, then there is no justice.

"At 2-0 down, we showed great character to get back in it. We gained some momentum and I was proud of our commitment and spirit.

"I feel sick to my core. When I wake up tomorrow, I'll be kicking myself. Apart from a few lapses, that's as good as we've played all season."