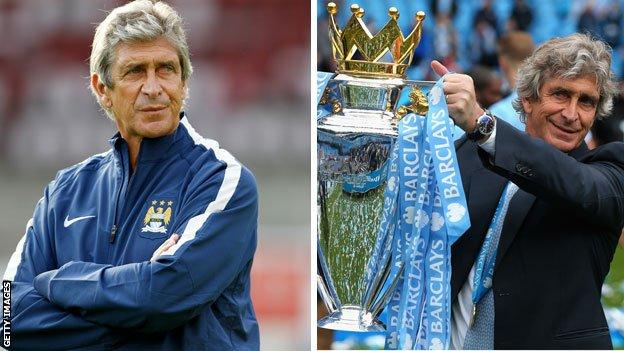 Yes, they were only 11. And yes, they were tears of joy at being invited by Pellegrini to watch City's first team train at close quarters.

But this touching little scene at Carrington provides a small insight into the affection in which he is held and the quiet, understated but tranquil atmosphere Pellegrini has brought to City in his 14 months in England.

It is all in stark contrast to the turbulence of his predecessor Roberto Mancini, whose tenure was a boom time for local photographers.

Daily they pitched up with their ladders, strode down the public right of way that runs down the side of City's training complex, climbed the steps and waited for the explosion.

Flare-ups amongst players were commonplace. Images from the day Mancini had to be pulled apart from Mario Balotelli were seen all round the world.

Pellegrini provides them with nothing.

The nearest you are likely to get to training ground drama from the Chilean is if he failed, on his way out, to sign autographs for waiting fans, a duty he carries out with a smile every day.

"There is certainly an element of that day with Balotelli appearing worse than it was, and I have sympathy for Roberto in that regard," said a source at City who transcends both eras.

"But Manuel will never appear in similar pictures. It just won't happen."

A home defeat by Stoke immediately before the international break may have taken some of the gloss off Manchester City's impressive start to the season.

Yet Pellegrini has already achieved enough in his short time at the Etihad to stand confidently in the dug-out opposite Arsene Wenger when City meet Arsenal on Saturday lunchtime.

It is not just what he has achieved - winning the Capital One Cup and the Premier League in his debut campaign. It was the way he did it.

Unlike his storied managerial counterparts such as Chelsea boss Jose Mourinho, former Manchester United manager Sir Alex Ferguson and current one Louis van Gaal, instances of irritation from Pellegrini are so rare, they are worth noting.

The only time he lost his temper in the dressing room during his first season in charge came in March following defeat to Wigan in the FA Cup, a game he did not feel his players had paid enough attention to.

Whereas Ferguson once got so angry at a press conference that he swiped a row of reporters' dictaphones to the floor as he furiously made his point, and Steve McClaren once stormed out after two minutes, snarling 'write what you want' after a dismal England showing against Andorra, Pellegrini 'lost it' only once last season.

Jonas Eriksson was the subject of his ire, as Pellegrini accused the Swedish referee of being "not impartial" after he sent off City defender Martin Demichelis during a Champions League home defeat by Barcelona.

"He has made a big impact on the dressing room," said City midfielder Samir Nasri.

"He is like an Arsene Wenger type of manager. Wenger is really cool, really calm and will tell you everything he thinks the day afterwards.

"Pellegrini is the same. He can get really upset, for example if he gave you his trust but you didn't give it back. But usually he is really calm."

This demeanour is nothing new, a persona adopted in a country where English is not his first language.

Asked to recall if the 60-year-old lost his temper during the five years he spent in charge at Spanish side Villarreal, former midfielder Marcos Senna replies: "It was very rare.

"I can only recall one time, at half-time of a game when he got a little angry at the team because of a poor performance."

Compared to Mancini confronting Balotelli, it is tame stuff.

More pertinently, it goes some way to explaining why last season, when newspapers, radio phone-ins and television debate gorged on Manchester United's amazing fall from grace and the potential for Liverpool's first title in 24 years, the champions were something of an afterthought.

Many City fans felt their club was being victimised, perhaps because of jealousy at the way Sheikh Mansour's enormous wealth has transformed their fortunes.

It wasn't that. It was just that finding something interesting to say about Pellegrini was such hard work.

There are only so many ways you can say someone is a decent bloke.

Yet in essence, that is his quality.

Mancini's complex personality allowed him to charm the media at the same time as blaming then director of football Brian Marwood for failing to execute transfer plans properly. Mancini could be dismissive to members of staff, antagonistic towards some of his players and generally remain aloof from those in whom he saw little merit.

In contrast, Pellegrini is widely accepted as being challenging for the media, spurning the opportunities to pick fights or make outlandish statements so many of his peers accept with such regularity.

He is courteous but says little of attention-grabbing interest. Even in the relaxed environment of a pre-season tour to the USA this summer, when it is traditional for managers to give additional access to the UK media, he did not.

But behind closed doors at City, they respect and like him.

Pellegrini will say hello to people Mancini would have walked straight past. He sticks to the message, and most importantly, to his job.

The philosophy is to get the best from the players he has, rather than throwing out the ones he cannot get along with.

Bosnia and Hercegovina striker Edin Dzeko is one of those whose performances have lifted since Pellegrini's arrival. He was a bit-part player under Mancini but is now a central figure and signed a four-year deal last month.

"The way Manuel approaches his work is very methodical," said long-time friend and fellow manager Arturo Salah, who has coached six different clubs in Chile as well as a spell in charge of the national team in the early 1990s.

"He is not prone to outbursts or losses of temper. He tries to explain things in a rational way. He does not shout. He just wants to get the most from his players."

This methodical approach can be traced back to Pellegrini's training as a civil engineer alongside Salah in Santiago.

"Manuel's mind was very suited to engineering," added Salah. "He was always very inquiring. I think that is why he went into coaching."

A sturdy central defender, Pellegrini did not leave Chile during his playing career, making more than 400 appearances for Universidad de Chile between 1973 and 1986.

The desire to travel was always there, though.

In 1988, he attended coaching courses in Italy and at Lilleshall, when he came into contact with Ferguson, who at the time was struggling to make an impression at Manchester United.

"Even back then, his dream was to come back to Europe," added Salah, who has known Pellegrini since the 1970s.

Under his guidance, the Yellow Submarines enjoyed the most successful era in their history, reaching the Champions League semi-final in 2006 and finishing second in La Liga behind Real Madrid two years later.

A single, trophy-less, season at Real followed, at the height of Barcelona's dominance, then a stint at Malaga, where Pellegrini made light of a deteriorating financial situation to come agonisingly close to a place in the Champions League semi-finals in 2013, only for two injury-time goals from Borussia Dortmund to deny him.

"He preferred tactics which centred around ball possession. He gave us an awareness of each opponent but he was very offensive-minded.

"The only reason he was not a success at Real Madrid was because they didn't give him time."

But by then his achievements had alerted City chief executive Ferran Soriano and director of football Txiki Begiristain - and when they wanted someone to bring stability to the club, they opted for Pellegrini.

They were not put off by an absence of medals, while Pellegrini does not lack self-belief. In his own mind, the 2007-08 season when Villarreal split Real and Barcelona in La Liga, confirmed him as a champion even if it brought no silverware.

In May, City's faith was rewarded when they beat Liverpool to the title, clinching it on the final day.

All the tributes to Liverpool and their bright young manager Brendan Rodgers that had been prepared had to be put in a drawer to be saved for another day.

It was almost as if, having done all that work once, the media as a whole could not bring themselves to do it all again for someone who prefers to blend into the background anyway.

But the quiet engineer is a champion now, emulating Jose Mourinho (Chelsea, 2004-05) and Carlo Ancelotti (Chelsea, 2009-10) as foreign managers who have won the Premier League in their first seasons.

"Manuel is a very simple person, a family guy," says compatriot Carlos Rivas, a team-mate with the Chile national side in the late 1970s and early 1980s.

It was from Rivas's soccer school in Toronto that the tearful children watching City's pre-season training session at Carrington came.

The invite came from Pellegrini, just as it did for Rivas when his old friend was at Villarreal, Real Madrid and Malaga.

No headlines were sought. None were received. t is the way he prefers it.

In his quiet, methodical way, 'The Engineer' has fixed Manchester City.