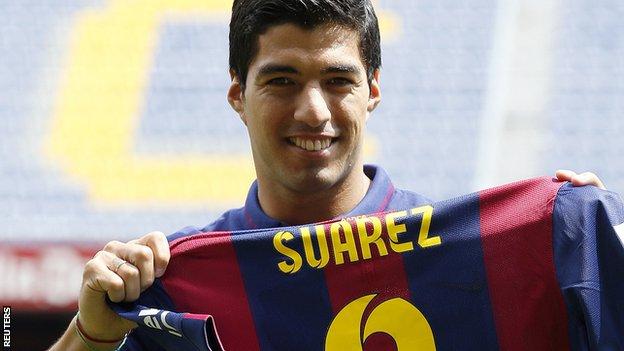 Barcelona say striker Luis Suarez will be able to play in the league match at Real Madrid on 25 October.

The game takes place a day after the Uruguay international's four-month ban for biting Giorgio Chiellini at the World Cup comes to an end.

The Court of Arbitration for Sport (Cas) also told Barcelona that summer signing Suarez, 27, is free to play.

"Cas has confirmed to FC Barcelona that the Uruguayan's suspension will end at midnight on Friday 24 October," read a statement on the Catalan club's website.

"Therefore, clearing him to appear in his first official fixture for his new club, against none other than Real Madrid, should (coach) Luis Enrique opt to play him."

Barcelona signed Suarez from Liverpool in a reported £75m deal, although the Spanish club say he cost them £65m.

They bought him even though he had been banned for four months from all football-related activities and nine international matches by Fifa for biting Italy defender Chiellini.

Suarez appealed the punishment to Cas, who upheld his ban but said he could train with Barcelona and play in friendly matches.

He then played his first game for the Catalan club when he came on as a substitute in a 6-0 friendly win over Mexican side Club Leon on 18 August.