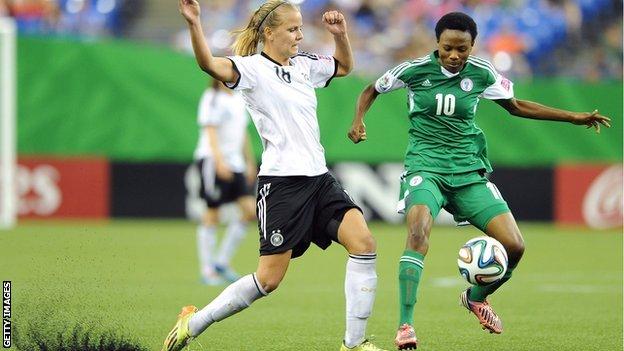 A Fifa executive is sympathetic to players protesting about synthetic turf at the 2015 Women's World Cup but says hosts Canada had the best bid.

Nearly 50 top players have signed a petition and threatened legal action if matches are not played on grass.

"Of course I have sympathy with players who want to play in the best conditions," said Fifa's Moya Dodd.

"But the important thing is to ensure that the tournament will be played in the best facilities available."

The Australian, who was voted onto Fifa's executive committee in 2013, added: "Certainly, the World Cup is being played in the country with the best bid."

The petition has been signed by the 2012 and 2013 Fifa Players of the Year, Abby Wambach of the United States and Germany's Nadine Angerer, as well as former England captain Faye White and current midfielder Anita Asante.

Lawyers for the group have accused Fifa and World Cup organisers of sex discrimination, with the group calling on global football chiefs, including Uefa's Michel Platini, to intervene.

The players also allege they were misled by Fifa into believing that traditional surfaces would be provided if there was significant opposition to the artificial pitches, proposed for all six venues in Canada.

"Despite reported pressure to stay on the sidelines, players from around the world are unified in this effort," he said.

"The players are frustrated and say this is a step backwards. Every previous World Cup - men and women - has been played on grass.

"We are talking about a couple of million dollars, a tiny fraction of Fifa's annual budget, to fix the fields in question to bring them to a level worthy of the tournament.

"Because it is so easily resolvable, I remain hopeful that talks will begin soon but if they don't, I suspect we will see them in court."

The world players' union Fifpro said it understood the concern about next year's World Cup.

"Players prefer to play on natural pitches and it's unthinkable that Fifa would choose an artificial pitch for the men's World Cup," said Tijs Tummers, the organisation's director of player services.

"In some countries, [synthetic turf] is the best or only viable option in order to host a World Cup, so I don't think you can exclude it on that basis," she said.

"I've played on synthetic turf and it's been better than a lot of the grass pitches I've played on. It's easy to generalise around the quality of turf, and those generalisations aren't always accurate. It's important to be open to technological advancements that make football better and more accessible."