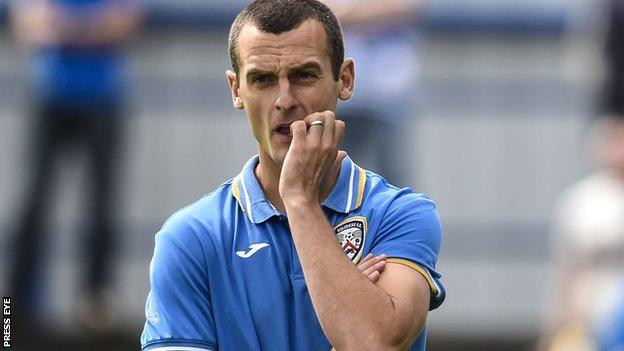 Coleraine's board has given its support to manager Oran Kearney after a poor start to the Premiership campaign.

The Bannsiders are second bottom in the league standings with just five points from seven games.

"We have been in consultation with and supportive of, the manager, Oran Kearney," the board said in a statement on Wednesday night.

"We can assure the supporters that they have and will continue to do everything practical to correct the situation."

Coleraine were beaten 2-0 by Glentoran on Saturday, four days after a 6-2 hammering at the hands of Crusaders at the Showgrounds.

The board added: "The Directors of Coleraine FC are concerned about the recent series of results of the senior team in the Irish Premiership which has resulted in our current position in the league.

"The Directors are committed to the long term stability of Coleraine FC built on sound financial management and a sustainable structural development throughout all facets of the club."

Kearney was appointed Bannsiders boss in 2011 after a spell in charge of Limavady United.