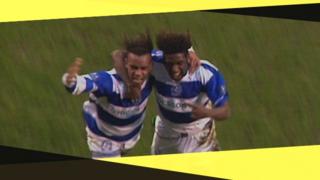 There seemed little danger as David Bardsley's cross floated towards the edge of the Barnsley box in their 1997 fourth round tie away to Queens Park Rangers.

But Trevor Sinclair's 20-yard bicycle kick - audacious, acrobatic and accurate - left the Tykes' defence in a state of disbelief and ensured him a place in every compilation of great FA Cup goals.

It was a rare highpoint in a season in which QPR were eliminated in the next round - losing away to Wimbledon - and finished short of the play-off in the First Division.

'Cup win would be incredible for Davidson'