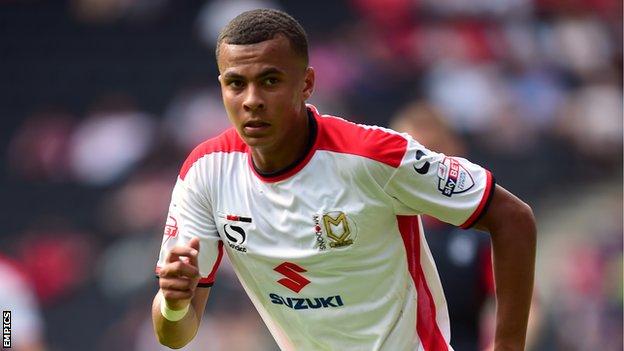 The 18-year-old slotted home from close range inside three minutes before Crewe were gifted a leveller thanks to a Kyle McFadzean own goal.

Will Grigg poked home to restore the home side's lead before Alli headed in a third from Ben Reeves' cross.

Benik Afobe's then netted after a long ball from Alli, who completed his hat-trick before Reeves curled an effort past goalkeeper Ben Garratt.

Alli - who extended his contract until 2017 this week - was named Football League's Young Player of the Month for August.

"We were very, very good. We worked off our shape very well out of possession. We're a team that's always on the front foot, and always trying to dominate on the front foot. I think today we did it so much better.

"We've now got to go to the league leaders next Saturday. The league table looks wonderful for seven days.

"The chairman said Dele Alli gave the best individual performance he's seen at the club. He does all the talking with a football, I don't have to talk about him. The fans have got a local hero to be very proud of."

"Nobody was anywhere near the standard required. There are no excuses for that performance. We have been battered. They are a very good side and were unforgiving in their attacking but when you play like that at any place in this league, then you are going to have big problems

"When we have a performance like that I hurt just like a supporter. It was shameful at times. None of them have come out of the game with any credit.

"We were so second best at times it was frightening. We spent most of the game fire fighting. When we were putting out one problem another one arose. It showed that some of our players are struggling with this league. We didn't show any ability on the ball or without the ball."

Shots on Target
Home14
Away5