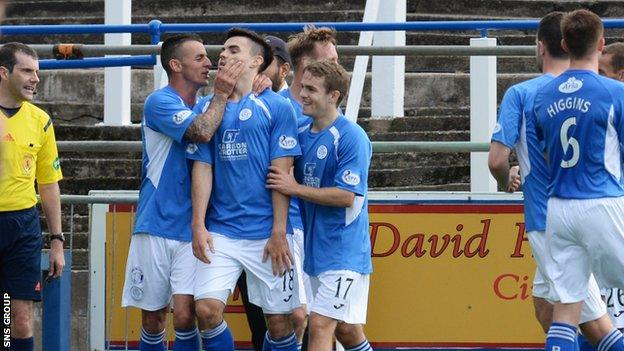 Ian McShane's first goal of the season was enough for Queen of the South to beat Hibernian, who continue to stutter in the Scottish Championship.

Midfielder McShane's run from deep was rewarded when Gavin Reilly squared to tee up a simple finish.

Matthew Kennedy had earlier missed an excellent chance to put Hibs ahead, scuffing a shot when well positioned.

It was a game of few chances, but the Doonhamers held on to record their first league win over Hibs since 1964.

Queens, who hope to announce their new manager over the next week, remain fourth and are now five points clear of seventh-place Hibs.

And caretaker player-manager James Fowler must have improved his chances of securing a job that chairman Billy Hewittson says has attracted 30 "serious" applicants.

Early on, eyes were not only drawn to the bright orange boots of Hibs midfielder Jake Sinclair, but also the quick and intricate things the Southampton loanee was doing with them.

The 19-year-old threaded a lovely pass through for midfielder Kennedy, who did well to nip in behind the defence, but his tame shot was far too easy for home goalkeeper Zander Clark to repel.

For all Queen of the South's play in the opening 20 minutes had an energy about it, nothing seriously penetrated a Hibs back-line which had Jordon Forster and Paul Hanlon at its core. But those two were about to get busier.

Doonhamers defender Andy Dowie side-footed over to give the visitors a warning that something more fruitful might be on its way, and 60 seconds later it arrived.

Reilly made the most of a fine through-ball and unselfishly squared to allow McShane to cap a run from deep in midfield with an easy finish past Mark Oxley in front of Hibs' away support.

A wayward free-kick by Congo international Dominique Malonga that hit the top of the stand behind the goal summed up the Leith men's half.

Hanlon's glanced header over from Kennedy's cross suggested Hibs might have had an equaliser in them after the break, with substitute Jason Cummings also having an effort cleared for a corner.

Dumfries lad Iain Russell had Queens' best chance of the second half, rushing in to head narrowly over after a bit of dithering by Hanlon.

Oxley was thrown up front at a set piece as the game ticked towards its close, but the goalkeeper, who has already scored this season, could not bring a leveller.