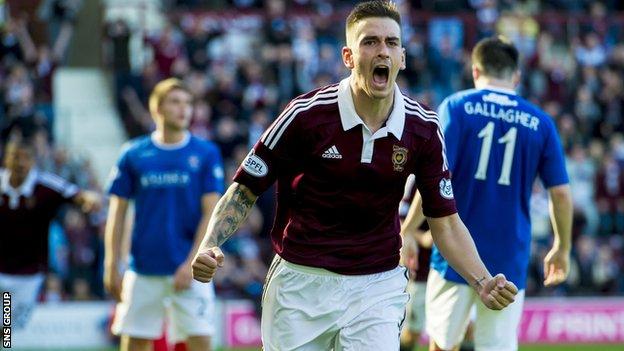 Hearts moved three points clear at the top of the Championship after sweeping aside Cowdenbeath at Tynecastle.

Billy King crashed in the opening goal after a sluggish start from the hosts, only for Callum Gallagher to level.

Jamie Walker headed Hearts back in front early in the second half, with Osman Sow adding a penalty soon after.

Substitute Dale Carrick then stole the show, slamming in a first-time shot and steering in a wonderful long-range strike to complete the rout.

Almost everyone in an impressive crowd of 15,594 left in high spirits, having watched Hearts romp to a fifth win in six league games, taking their tally of goals to 17.

King opened the scoring in style, lashing the ball high into the net from the edge of the area following excellent build up play involving captain Danny Wilson and Walker.

The winger almost made it two when he was set up by James Keatings, only for his effort to be blocked by Jon Anderson.

Cowdenbeath worked hard throughout the first half and equalised when Gallagher was quickest to react after a Sean Higgins shot was saved by Neil Alexander.

Sow came close to restoring Hearts lead but his shot was brilliantly saved by Robbie Thomson before Callum Paterson glanced a header wide with the goal gaping.

The home side were dominant in the second period and were back in front after 48 minutes when Adam Eckersley cut the ball back from the byeline and Walker looped a header over Thomson.

The third goal came from the penalty spot when Walker was bundled to the ground by Cowden substitute Darren Brownlie.

Sow stepped up and sent a left-foot shot low into the net.

Soufian El Hassnaoui, on as a substitute for his home debut, slipped a ball through to Sow but the striker blasted high over the crossbar when it looked easier to score.

Carrick extended the lead with a first time shot that flew past Thomson into the corner and the replacement cracked in another impressive strike with four minutes remaining.