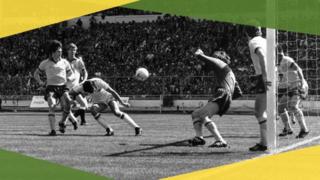 West Ham are the last team to win the FA Cup from outside the top flight, and their victory over Arsenal in the 1980 final came via a rare Trevor Brooking header.

The England midfielder stooped to redirect Stuart Pearson's wayward shot past Pat Jennings after 13 minutes and the Hammers saw out the rest of the game despite ceding plenty of possession to Arsenal.

Paul Allen could have doubled West Ham's lead late on, but the teenage striker was chopped down from behind by defender Willie Young as he raced in on goal. Young escaped with only a booking, but the incident hastened the introduction of red cards for professional fouls.

Although they finished seventh in the old Division Two in the same season, West Ham's FA Cup victory was the catalyst for a successful promotion campaign in 1980-81.