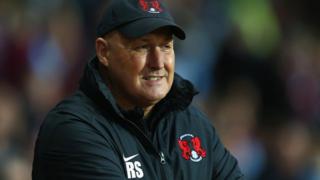 One game to save O's job - Slade

Leyton Orient manager Russell Slade tells BBC London 94.9 he has one game to save his job after their poor start to the League One season.

After Saturday's 2-0 defeat at home to Colchester the 53-year-old was told by O's owner Francesco Becchetti to improve results.

Orient, who have won just one of their opening six league games of the campaign, travel to Notts County on Tuesday evening and Slade says "the situation is we need to get a win or that will be curtains".