The Magpies are bottom of the table after failing to win in their first four Premier League games and have one league victory from 12 matches.

But it is understood Pardew, 53, will remain in charge for Saturday's home game against Hull City.

Hull boss Steve Bruce has said speculation about him replacing Pardew was "disrespectful".

Despite media speculation over his future, Pardew took training as usual on Monday.

In September 2012, he signed a contract extension that would keep him at the club until 2020 after guiding Newcastle to fifth place in the Premier League and securing a Europa League spot.

His side finished 10th last season after a decline in form during the second half of a campaign in which Pardew was handed a seven-match ban for a headbutt on Hull midfielder David Meyler.

Newcastle have only five league victories in the whole of 2014.

Norman Watson, chairman of the Newcastle United Supporters' Trust, said most fans wanted Pardew to be sacked and they also believe Ashley should leave.

"One of the reasons why Pardew is so unpopular is he simply does what he is told," said Watson, whose group has 800 paid members and 25,000 email subscribers.

"He has lost all credibility with the fans."

"I think that fans for a long time have thought what is the point of getting rid of Pardew because we will get someone just as bad but I think that the time has come when I think it is very hard to see how he can carry on," he told BBC Radio 5 live.

Last week Ashley denied a report he was ready to listen to offers for Newcastle, and said he would not sell the club until at least the end of next season.

Following the report, the club banned the Daily Telegraph, adding to a list of out-of-favour organisations that includes the local Chronicle newspaper and the supporters' trust. 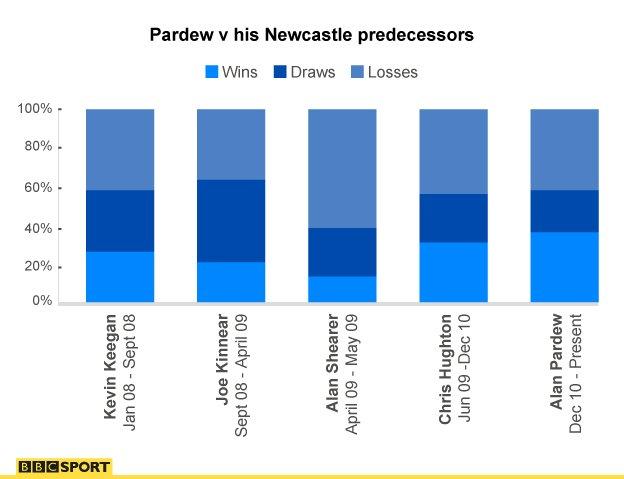