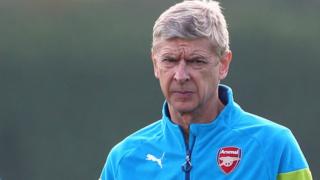 Arsenal manager Arsene Wenger has singled out German and Spanish teams as the main contenders for this season's Champions League.

The Gunners travel to Germany with injury problems in defence as they begin their European campaign away to Borussia Dortmund on Tuesday.

Right-back Mathieu Debuchy and left-back Nacho Monreal are out, while new signing Calum Chambers is a doubt.