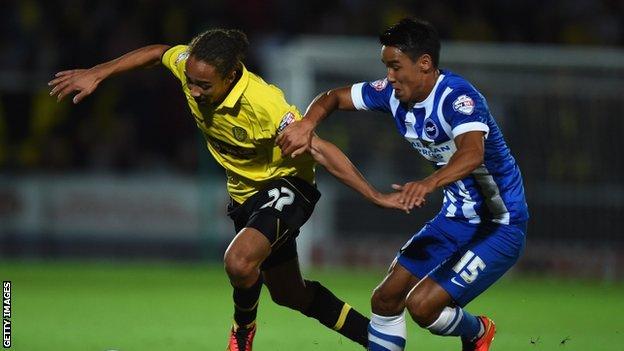 Brighton cruised past Burton in the Capital One Cup to set up a trip to Tottenham in the last 16.

The visitors went ahead when Gary Gardner nodded Paddy McCourt's free kick back across goal and Rohan Ince powered a close-range header.

Brighton skipper Inigo Calderon was sent off late on for a dangerous high challenge on Robbie Weir.

The captain's needless red card was the only black mark on an otherwise satisfying night for Brighton boss Sami Hyypia.

League Two high-flyers Burton had previously dumped out Wigan and QPR but were outclassed by the Championship outfit.

"It's another challenge, but we'll go to Spurs to play our game and try to win that one as well.

"I've good and bad memories of playing there for Liverpool, but most of the time bad I think.

"Hopefully we'll change that and make the statistics look a little bit different."

"It was going to be a huge ask to knock out Wigan, QPR and then Brighton.

"I thought we definitely could but it just shows how difficult a task it is sometimes.

"I just felt early in the game we didn't make the start in terms of lifting the crowd as we had done in the other games.

"We were a little bit lacking in self-belief at times."