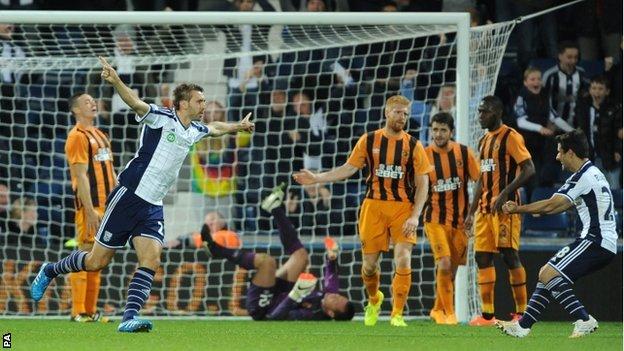 West Brom scored two goals in the last four minutes to overcome Hull in the Capital One Cup third round.

Robbie Brady latched on to a Hatem Ben Arfa through-ball to put Hull in front but the tables were turned in a dramatic finale.

Liam O'Neil, Sebastian Blanco and Cristian Gamboa all made their full debuts in a West Brom side showing several changes from the one that beat Tottenham 1-0 at the weekend.

The hosts took the lead on 15 minutes when O'Neil's cross landed perfectly for Blanco. He was denied from point blank range by Steve Harper, only for Ideye to stab in from two yards.

The Nigeria international injured himself in scoring the goal and had to be replaced by Georgios Samaras.

Hull turned the game in the space of 10 minutes either side of half-time.

Yannick Sagbo found Brady scampering down the right and he crossed for the unmarked Ince to score at the far post.

Five minutes into the second half, Ben Arfa wriggled inside from the wing and split the Baggies defence with a pass, which allowed Brady to collect and find the corner of the net.

Hull were inches away from adding to their lead when David Myler's volley arrowed wide before Albion began their late rally.

Harper denied Claudio Yacob and Berahino but could do nothing to stop McAuley's crisp volley through a crowd after Hull had failed to clear a corner.

One minute later, Silvestre Varela slipped the ball through to Berahino and the England Under-21 squeezed it past Harper from a tight angle to set up a last-16 tie away to Bournemouth.

"Brown Ideye has rocked his ankle when he scored so it was a bitter-sweet moment.

"On one hand he scored, on the other he had to go off. He'll be happier because the pressure goes on strikers when they don't score.

"He shows in training he's a good finisher and it was a shame he had to go off but I don't think it's too bad."

"With three minutes left you are thinking 'I'm going to leave this alone'.

"We were so comfortable you are thinking it's going to be us to score another. The third one is a lack of concentration and we were probably in a state of shock after what happened."