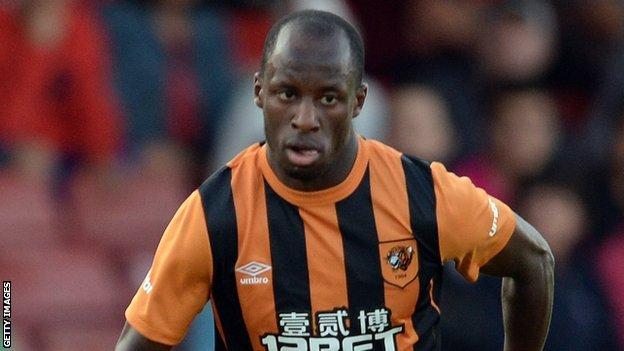 Hull striker Sone Aluko is determined to force his way back into the team after being overlooked this season.

The 25-year-old Nigerian has not started any of the club's four Premier League matches, having been pushed out by the Tigers' new signings.

"Competition for places is very good. It's healthy so I'm not against us signing players," he told BBC Sport.

"I'm not going to run away from that challenge. I'm happy to stay in Hull and fight for my place."

And Uruguayan striker Hernandez made an instant impact by scoring on his debut in the 2-2 draw with West Ham.

Aluko sees the arrival of top players as positive for the club, while also insisting his belief in himself has not been shaken.

"I've always wanted the best players to play in your team," he said. "It improves the standard and improves the quality. It means you'll most likely win more games.

"I'll always be confident that whoever we sign I'll be able to get in the team and if not, then you don't."

The former Birmingham City and Glasgow Rangers forward also hopes he can build on his late substitute for Nigeria last week in a 0-0 draw against South Africa in Cape Town.

It was his first appearance for the Super Eagles after more than two years in the international wilderness, and he is itching to play more regularly.

"Realistically we have an unbelievably strong squad that won the 2013 Nations Cup and went to the World Cup in Brazil.," he said.

"I feel honoured to be recalled by the coach and I'm confident in my ability so, when I get the chance, I will have to take it."

However, Aluko's immediate focus is on breaking into the Hull starting line-up.

He added: "The Premier League is televised back home and I need to be playing regularly for Hull.

"It's going to be a hard season but I'm ready to fight for my place - hopefully that will help my case with the national team selectors."