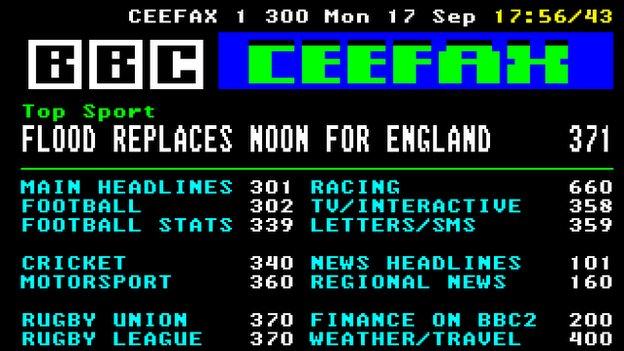 Tuesday marks 40 years since the introduction of the dearly departed Ceefax, the world's first teletext service, and to celebrate the anniversary of the launch we want BBC Sport readers to write their own Ceefax match reports.

While newspaper and website stories can run to hundreds or even thousands of words of eloquent prose, Ceefax - which was finally shut down a couple of years ago - provided journalists with a very different challenge - only four paragraphs, 80 words and the headline had to be exactly 33 characters.

BBC Sport is asking you to step back in time and send us one such match report on one of Tuesday's League Cup matches (full details at the bottom of the page) - we'll publish some of the best on the website on Wednesday.

"There is an art to summing up a story or match report in four paragraphs - whether it is a transfer, a 4-3 football match, or six hours of Test cricket.

"Every word counted and things like the venue for a football match, obvious from whom the home team were, wasted valuable space, as did leaving only one word on a line - called a widow.

"Headlines had to be exactly 33 characters and often contained the words 'joy' or 'woe' as short ways of conveying emotion.

"Ceefax was the internet and mobile phone service of its time and was the only way to get latest football scores if you were not at a game or listening to the radio.

"I remember working at the World Snooker Championship in Sheffield when, on Saturdays in the press room, players not involved in a match and other journalists would crowd around our screens to find out how their football teams were getting on."

Its final broadcast came almost two years ago, as television switched from analogue to digital transmission, but it is still fondly remembered by those of a certain age.

In a time before Twitter, smartphones, sport apps and even text messaging, it was the destination of choice for sports fans to catch up on the latest news, read match reports, results and all manner of statistics.

Page 300 was your starting point, 301 had the day's top headlines, 302 for football news, 324 for the Premier League table, 340 for cricket and 370 for rugby - page numbers ingrained in the memory of people throughout Britain.

The internet before the internet was invented, Ceefax was so called because it enabled readers to "see the facts" of a story.

For avid readers, the following may sound familiar:

But it was not just sports fans who found a place in their hearts for Ceefax. Sports stars, too, were very fond of it.

Former Netherlands striker Dennis Bergkamp once said the reality of his 1995 move to Arsenal only hit home when he punched in 301 on his remote control to see "BERGKAMP JOINS ARSENAL" in huge white letters across the top of the screen.

It also played a part in sports stories - both the good and the bad.

Ceefax had a significant role in one of the great FA Cup upsets. In 2001, Wycombe Wanderers, then of the old Second Division, advertised on their website the need for a striker, having been seriously depleted by injuries.

This was spotted by a journalist for Ceefax, who added the story to the news in brief page. The agent of Roy Essandoh, an unemployed striker in Finland, answered the call and, within days, Essandoh became a Wycombe hero by scoring a last-minute header to send them into the FA Cup semi-final at the expense of Premier League Leicester.

On another occasion, Glenn Hoddle's daughter Zara wrote to Ceefax to back her father when his job as England manager hung in the balance in 1999, while Bruce Rioch found out he had been sacked as QPR assistant manager when he read it on Ceefax.

Send us your report from one of Tuesday's League Cup matches - taking into account the guidance in the picture above - using the form below. We will publish a selection of these on the website on Wednesday.

Please note we are no longer accepting submissions.