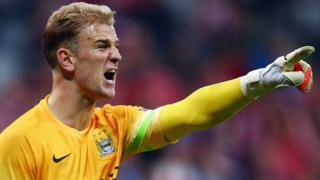 Hart on 'busy' night against Bayern

Manchester City goalkeeper Joe Hart, 27, says is "always busy" against German opposition after the keeper made a string of saves during his side's 1-0 defeat by Bayern Munich.

England shot-stopper Hart had earlier kept City in the match with saves from Thomas Muller, Gotze and Boateng.