Wembley Stadium will host the final and semi-finals of Euro 2020, European governing body Uefa has confirmed.

The English Football Association won unanimously after the German FA (DFB) withdrew just before the Uefa vote to focus on a bid to stage Euro 2024.

Cardiff missed out as one of the 13 venues that will host matches for the first pan-continental Euros. 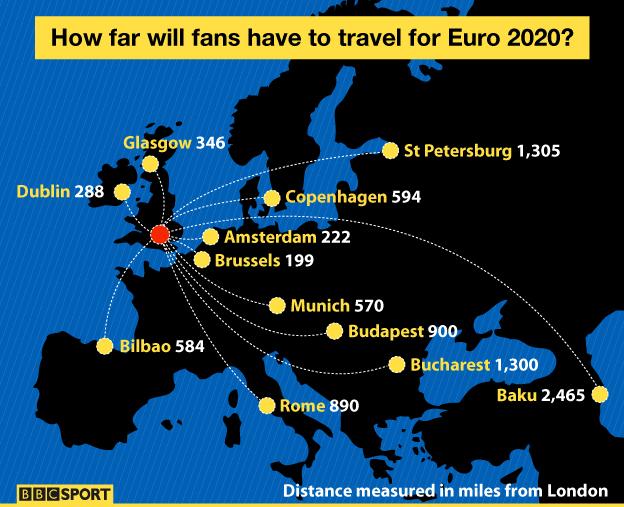 England's FA chairman Greg Dyke, 67, said: "This bidding process was open to more than 50 Uefa countries so for Wembley to be recognised in this way is testament to a lot of hard work behind the scenes."

Dyke confirmed that the FA had held discussions with their German counterparts but said there was no deal in place to back DFB's bid for Euro 2024.

"There is no agreement other than we will not bid for 2024, as we wouldn't get it," Dyke said.

England manager Roy Hodgson said the opportunity to play a final at Wembley would be excellent motivation for his players.

"For the young team that is emerging, many of those players will be at their best football years in 2020," the 67-year-old said.

"If the young players of today do not use this to spur them on then they are making a mistake.

"By 2020 some of them will be playing their fifth tournament and that is the type of experience you can't buy."

The quarter-finals and three group matches will be held in Munich (Germany), Baku (Azerbaijan), Rome (Italy) and St Petersburg (Russia).

Scottish FA chief executive Stewart Regan said the backing of former Manchester United manager Sir Alex Ferguson and the long history of football in Scotland had been key to their bid.

"Glasgow was the city that held the first ever football match at international level - between England and Scotland - back in 1872 and we played heavy on the history," Regan said.

"Sir Alex Ferguson, last week, supported us, and spoke very passionately. Football has won today and we are delighted."

On Cardiff's failed bid, Welsh FA chief executive Jonathan Ford said: "We had a very strong technical bid, we have an excellent stadium and record in staging major events.

"But it came down to a vote and, unfortunately, Wales were not successful this time."

Stockholm, Skopje, Jerusalem, Sofia and Minsk were the other cities not included in the 13.

The current multi-country format is the brainchild of Uefa president Michel Platini and is expected to be a one-off to mark the 60th anniversary of the European confederation.

Platini said: "This is a historic moment because we'll be able to bring this competition to all the countries of Europe and especially to countries that would never otherwise have the chance to host such a competition."