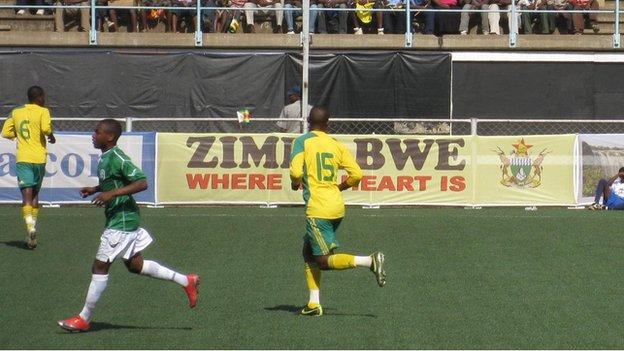 Zimbabwe have launched a bid to host the 2017 Africa Cup of Nations with President Robert Mugabe and the government giving full support to the plans.

Libya withdrew from staging the tournament on security grounds, and countries have until 30 September to submit proposals to the Confederation of African Football.

Sports minister Andrew Langa and tourism minister Walter Mzembi announced the plans in Harare, saying they met with President Mugabe, who gave his approval to the bid.

Zimbabwe is considering a joint bid with Zambia or another southern African nation.

Langa said that finances are still to be secured, and that Zimbabwe might use its close ties with Libya for assistance.

"The budget is still work in progress, and we now have a committee of ministers and officials working on it," said Langa.

"Libya have been an all-weather friend of Zimbabwe and could be engaged by Zimbabwe to maintain and retain their presence at the tournament by financially and materially endorsing and supporting Zimbabwe's bid to replace them."

Zimbabwe had been given the right to host the 2000 Nations Cup, but the tournament was moved to Nigeria and Ghana after Caf said that preparations were behind schedule.

Minister Mzembi said that Zimbabweans would like to be given another chance.

"The public want it and there is absolute support from the people, so let's work together to deliver the 2017 Nations Cup to Zimbabwe," he said.

Mzembi added that government is willing to construct a stadium at Victoria Falls if the bid is successful.

However, Caf says that all infrastructure and stadiums must be in place already.

Currently Zimbabwe has three stadiums that Caf might approve - the National Sports Stadium and Rufaro Stadium in Harare, along with Barbourfields in Bulawayo.

Bulawayo's Luveve Stadium is being upgraded ahead of the Region 5 Youth Games to be held in December.

In July Mzembi said that Zimbabwe would like to bid to co-host the 2034 World Cup.

Successfully staging the Nations Cup would be a step towards that ambitious goal.