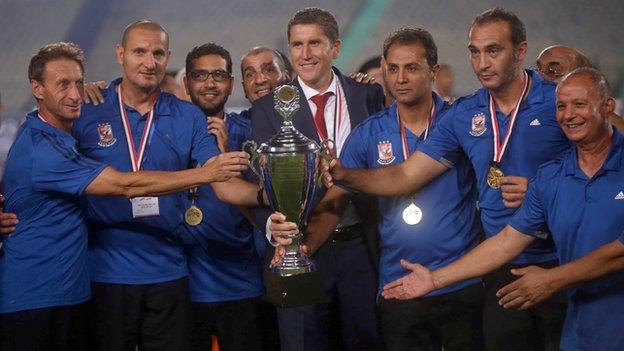 Egyptians Al-Ahly made a timely return to form with a 1-0 Caf Confederation Cup semi-final, first-leg win at Cameroonians Coton Sport.

The Cairo 'Red Devils' had won just one of their previous five matches in the second-tier African club competition and scored a meagre three goals.

Attacking midfielder Walid Soliman was Ahly's match-winner, scoring the only goal on 72 minutes at Stade Omnisports Roumde-Adja in the north-western city of Garoua.

Soliman, who recently returned to the starting line-up after a long injury absence, troubled Coton from the kick-off.

An acrobatic Feudjou save foiled Soliman in the opening minute and the Egyptian later failed to score when one-on-one with the goalkeeper.

This was the fifth Caf match between the clubs and Coton have yet to win, losing twice and drawing three.

Ahly who have won a record 18 African titles, host the return match in Cairo next Sunday and look set to become the first Confederation Cup finalists from Egypt.

Christian Kouame scored the match-winner 11 minutes after half-time at Stade Robert Champroux in the commercial capital.

His only other Confederation Cup goal this season came seven matches ago from the penalty spot in a play-off victory at Nigerians Bayelsa United.

Defeat ended a purple patch by the 2012 winners Leopards, who scored four goals each against Coton and Ivorians ASEC Mimosas in group games.

The sides clash again on Saturday in the Congolese city of Dolisie and the overall winners will enjoy home advantage first in the two-leg decider.