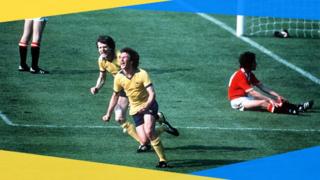 With Liam Brady pulling the strings, Brian Talbot and Frank Stapleton applying the scoring touches and the clock ticking past 85 minutes, Arsenal seemed to have Manchester United beaten and the 1979 FA Cup won.

But the match to that point was just the curtain raiser to a furious five-minute finale.

Arsenal's 2-0 lead disappeared in a twinkle as Gordon McQueen stabbed home in the 86th minute and then, two minutes later, Sammy McIlroy dribbled past two defenders to poke in a dramatic equaliser.

The United fans erupted, but a bewildering script had one final twist. Almost straight from kick-off Arsenal broke upfield and Alan Sunderland charged in at the far post to meet Brady's cross and snatch back the trophy.

The game was dubbed the "five-minute final" thanks to its see-sawing climax.