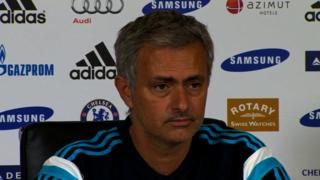 Chelsea manager Jose Mourinho says he was "not expecting" to see former Chelsea star Frank Lampard end up at Manchester City, as the Premier League leaders prepare to travel to champions City on Sunday.

The Blues' record goalscorer signed for MLS side New York City in the summer before agreeing to a short-term loan deal with the Manchester club.

Sunday's fixture at the Etihad sees two of the favourites for the title going head-to-head, but Mourinho insists the match is just "one more game, three more points".