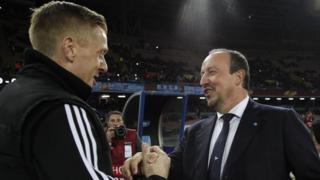 Swansea City boss Garry Monk says he has been influenced by some of the greatest managers of the modern game.

Jurgen Klopp and Jose Mourinho are among them but he says he has put his own stamp on management.

Watch the full interview on Football Focus on Saturday 20 September, 12:10 BST on BBC One, BBC One HD and the BBC Sport website.