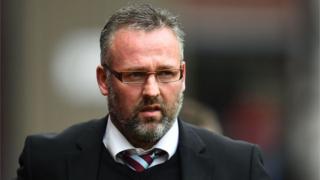 Aston Villa manager Paul Lambert says a virus which has swept through his team had an effect on his players, after watching them lose 3-0 to Arsenal.

The Gunners offered no sympathy in a devastating four-minute spell in the first half, as strikes by Mesut Ozil, Danny Welbeck and an Aly Cissokho own goal resulted in Villa's first league loss of the season.

Villa's eight shots on target in their opening five games is the lowest of any Premier League team this season.