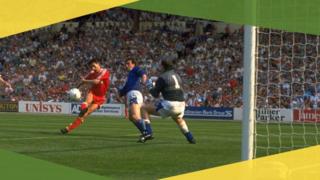 Ninety-six Reds fans were fatally injured during their semi-final against Nottingham Forest at the Sheffield ground.

Little more than a month later, a city was united as Gerry Marsden led the two sets of supporters in an emotional rendition of You'll Never Walk Alone before kick-off at Wembley.

An enthralling game followed with John Aldridge's early goal cancelled out in the last minute of normal time by Everton substitute Stuart McCall.

Ian Rush restored Liverpool's lead with a smart shot on the turn in extra time and, after McCall again pegged them back, the Welshman scored a decisive second.